I recently finished a couple of scarves that I am giving away for Christmas gifts. Notes and pictures under the cut! :o)

Pattern: Danica
Yarn: 4 skeins Goddess Yarn Emmanuella 100% Merino wool (2 dark grey, 2 light grey) and 1 skein Goddess Yarn Phoebe in blue.
Start: Nov 5
Finish: Dec 10
Length: 63 inches
Notes: I jumped right into this one. I read over the pattern before starting and pretty much trusted the instructions. This was the first time I tried entrelac, and for the most part it was interesting enough to keep my attention. Once I was maybe half way through, I realized that I had a LOT of ends to weave in. This caused me to dawdle and procrastinate finishing this. I eventually became motivated when I realized that I had another gift that I needed to finish after this one and I was running out of time. Before blocking, the squares were very puffy and very much had the illusion that they were woven over and under each other. When I blocked it however, my method made the yarn flatten and lose some of the over-under illusion. This however was intentional, so I don't mind it. Washing and blocking made the yarn feel so very soft and it was almost a different scarf than the one I had knit.
I think because of the amount of time it took to weave in all the ends this is probably the only time I am making this scarf. Entrelac however is still very cool, and I would have no problems making something without so many color changes.

The few pictures of it blocking came out kinda cruddy, so the one shot I have is of my husband being very photogenic and a good sport for modeling. 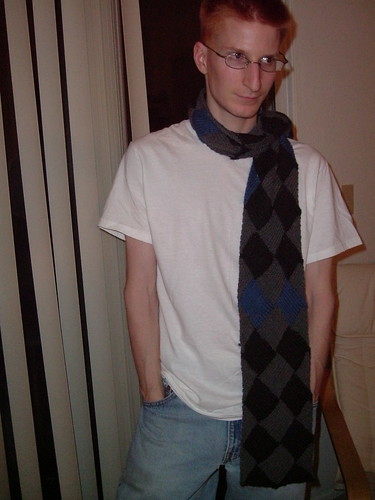 Pattern: Diagonal Lace Scarf
Yarn: 1 skein (~250yds) Lorna's Laces Lion and Lamb color Mixed Berries (50% silk, 50% wool)
Start: Dec 5
Finish: Dec 14
Length: 48 inches
Notes: The pattern I have is a few typed lines on a sheet of paper that I received for free along with my purchase of the yarn at my LYS, so I am not sure if it is the LYS's pattern or if it came from elsewhere. It is pretty simple and the most complicated stitches are YO's and k2tog's. This was very enjoyable to knit since I didn't have to think too much and it flew through my fingers. The yarn was very soft and really made it go by fast. Also, since this was a decently priced skein, it was nice that I could get a very pretty full scarf out of it.
Again with the washing and blocking; I can't repeat enough how much this simple act does for the knitted item. When I was knitting, even with the garter stitch border, the fabric had a tendency to curl into a tube length wise. This was completely solved with washing and blocking. Also, as soft as this yarn was when I was knitting, when I pulled it off the knitting board it was like touching soft strips of heaven. 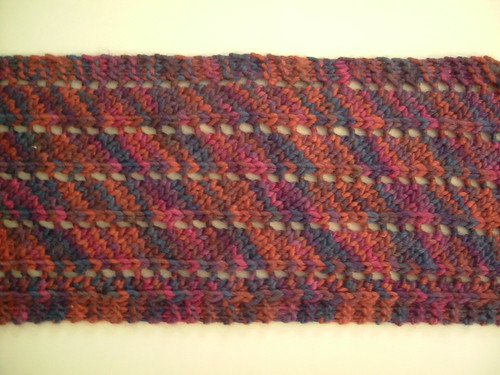 And I quickly modeled it to show what it looks like on a body. 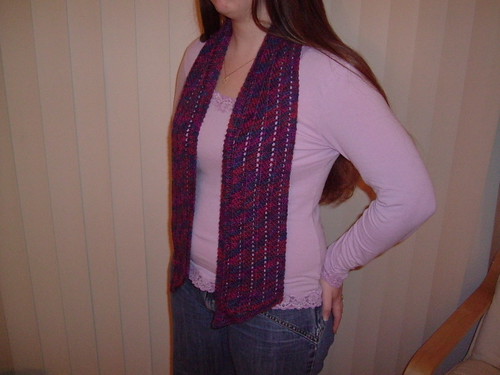 Next project: socks! And holiday vacation!!! ...well... at the end of the week.
Tags: finished object
Subscribe